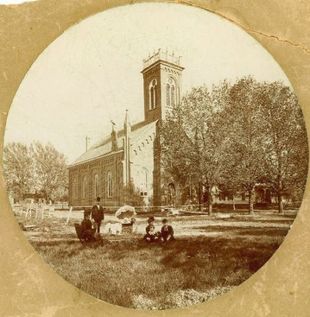 First Presbyterian Church was established in 1836 in the small village of Farmington, Illinois.  The first sanctuary (a small wooden structure)  was erected in 1842.  By 1864, the first building could no longer support the needs of the congregation and a new building was necessary.  Shortly thereafter, a Gothic brick and mortar building was erected and was fully completed by 1870.

In the 1890's, it became necessary to renovate the building to add "modern" conveniences such as a radiant heat (it had been heated with coal stoves) and electricity.  To accommodate the furnace, the floor of the sanctuary needed to be raised up.  It was decided at that point to reorient the sanctuary layout from a prairie style sanctuary that faced east to a semi-circular amphitheater style facing south.  With headroom now available in the basement, a kitchen and usable space were also added.

When you walk in the front door of the church today, you will be greeted by a picture of our Lord with his arms open to you (painted by Elder Marj Guidi), and a congregation just as welcoming.  If you have infants and toddlers, we have a nursery available.  We have five Sunday School classes for pre-K all the way to high school, and two adult classes.  We are handicap accessible through the east breezeway.